To create this sample library, Drumdrops went into The Pool studio in London and recorded Ben Hilier’s eight-piece 1963 Premier Outfits 54 kit, using the studio’s collection of vintage microphones and processors. The kit was chosen because it was considered a classic model and is, according to Drumdrops, similar to the one used by Ringo Starr in the early 1960s.

The end result of the team’s efforts is fairly straightforward. There are no extras, such as tambourine or wood block samples, just the drums and cymbals of the kit. The pack also lacks MIDI groove templates, so it is up to the user to either program their own patterns or source them from somewhere else. That said, the retail price is very low relative to products that offer more features, so their omission is not a matter for complaint. In fact, customers can spend even less if they opt for the non-Kontakt version, which simply has templates for all the major samplers, or less still by purchasing the Single Hits Pack.

In all, the samples number almost 7000 and the download size is 2.5GB. In terms of variations, for the snare there are dampened and un-dampened side-stick, rim, centre and edge hits, and every one of those has 16 velocity layers, six round-robins, and close, overhead and room microphone recordings. The number of layers, round-robin variations and mic-positions is the same for cymbals, and and toms, although. of course the actual hit types are different.

The Kontakt interface is headed by a mixer page showing channels for kick, snare, hi-hat, ride, overheads and the two toms. Each channel has a Transient Master processor for applying a filter envelope to the output, a four-band EQ, and a send to convolution reverb, which benefits from a large menu of preset options. The next page, called Settings, enables the user to control a set of parameters called Randomisations, which are designed to introduce extra variations. The last page features a fetching graphic of the kit, which plays samples when it is clicked with a mouse. Here the user can alter the velocity curves of each drum and cymbal by selecting one from the three presets, or drawing their own curve on a grid.

When taken all together, the interface’s various controls enable the user to reshape the sound and balance of the kit very significantly, and it can be done speedily by selecting pre-saved configurations and presets from a menu. The overriding impression of the kit is that it is very well balanced, and has been recorded with care and precision. The room reverb on the samples is slight but warm, and seems to be in keeping with the somewhat soft sound of the kit. There are virtual drum instruments with more character, but a solid and reliable workhorse is often a more useful tool to have.Indeed, anyone looking for a general-purpose kit with a less aggressive sound than modern equivalents should definitely give it a try. 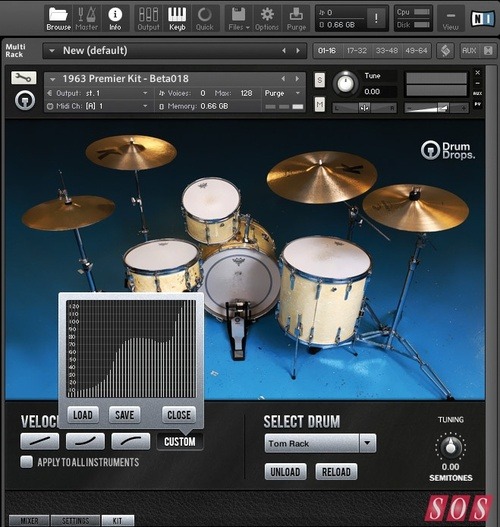