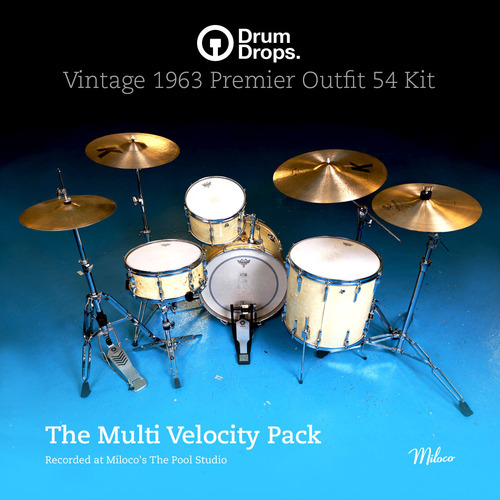 The Multi-velocity and Single Hits Packs of our vintage 1963 Premier Outfit 54 Kit have now been updated to v1.1. The Studio One Impact drum template has been improved, an Ableton Drum Rack template has been added and we have now added an alternative mix of the samples. These are called the alternative ‘Tape and Valve Mix Samples.'

The alternative samples were mixed through an SSL 4056G+ Console which had a Manley Variable-Mu Compressor on the mix insert, whilst they were also sent off in parallel to an EAR 660 tube compressor (based on the famous Fairchild 660). The samples were then also sent off to two Urei 1176 compressors, again in parallel, which had the compression turned off, which adds a little solid state distortion to the valve distortion that was already coming from the EAR 660. Then crucially the samples were printed to BASF 900 ½” tape, running on an Ampex ATR-102 machine, running at 30ips.

For those who have not yet bought either sample pack this doubles the size of the packs and offers more for your money. For any customers who have purchased the packs just head over to your account and redownload the new updated versions.